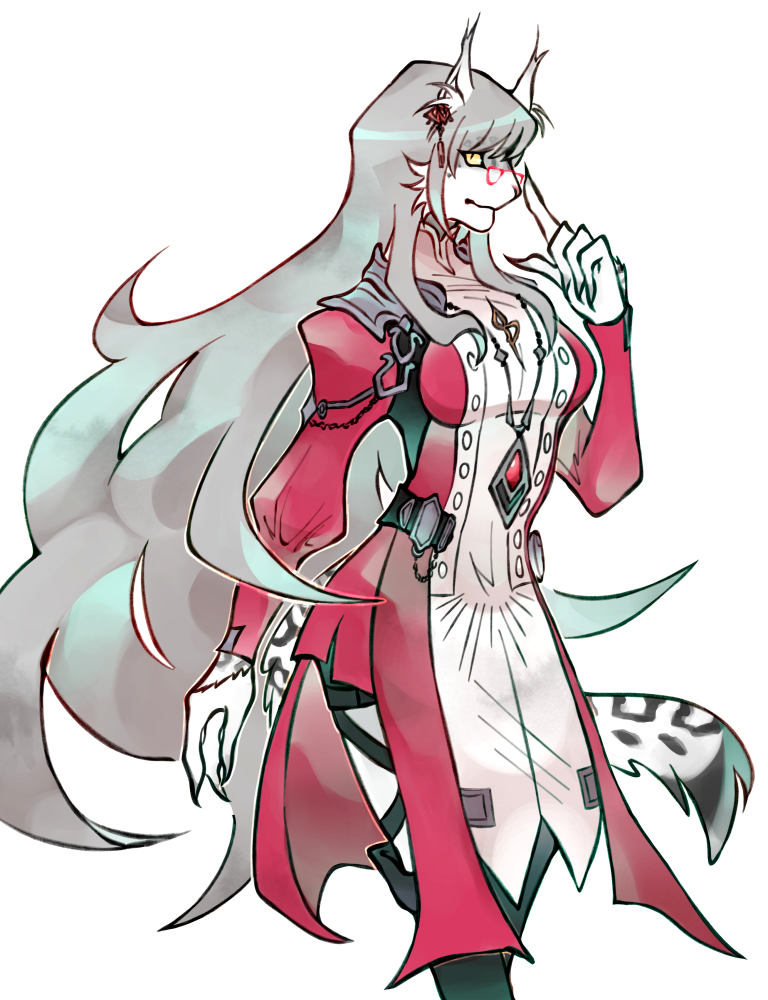 A newly minted Sharlayan Sage with innumerable eccentricities and differing views from her peers.

Arylett is an intellectual. She constantly wants to learn about a variety of philosophical and psychological subjects, even if she simply cannot understand it all… and often becomes overwhelmed by an overload of knowledge. Her favorite question to ask is “why?”

Her appearance manifests as a white-furred Hrothgar with markings similar to a snow leopard and long silver-gray hair. She wears crimson glasses, scarlet Sage vestments, black sandal-like boots which have her paws sticking out of them, and a crimson earring.

Though it is in her nature to be curious, Arylett prefers to focus on large scale issues. This means she only really cares about things pertaining to the state of the world and its inhabitants, or how nature works…. not so much how your day was, or other casual topics. Essentially, she’s not very personable, unless it involves issues of a deeper, more psychological nature. Further, she has little patience for trivialities, and becomes quite irritated by distractions outside of the task at hand, or topics that interest her.

She tends to formulate her own thoughts and views, being rather individualistic and having some unawareness for the reaction others may have for her quirks. Though she is keenly aware through experience that people may disagree with her odder views and will make an attempt to keep them to herself. These attempts usually  fail after a scant few conversations, especially about things she is is immensely passionate about.

Due to her trouble keeping her mouth shut, she is very prone to sermonizing and delivering grand speeches regarding esoteric and philosophical concepts. Her mind endlessly swills with ideas waiting to be expressed.

In spite of all this, she has a genuine desire to help others and is a particularly sensitive individual that tries to be as compassionate as she can. Even when she might not be so good at expressing this.

Within the walls of Sharlayan, a nation thought to be of knowledge and wisdom, certain outsider elements had infiltrated the darkness beyond the Forum’s stern gaze.

They would come to form pocket groups that could be generously referred to as “alternative research factions” but in actuality, were cults designed to exploit others for the sake of unethical experimentation. Victims would be lured in by their impossible claims, and pie-in-the-sky ideals.

One said group was created by a banished Garlean, Caius viator Aurelius, one of Aulus Asina’s minor assistants. A two-bit researcher of mediocre skill, he was a convenient scapegoat for unsavory experiments that had leaked to the public. Seeking to prove his worth and eventually return to Garlemald, he carefully hid his identity and settled in Sharlayan, creating the alternate research faction known as “Knowledge Without Boundary.”

Two victims unlucky enough to be suckered by Caius happened to be Arylett’s parents, refugees from the Bozja Incident who had settled in Thavnair. At the time, Arylett was a two year old child by the name of Anya Cervenkasch and had suffered from a aetherical defect similar to being tempered. It had left her so overstimulated by everything around her that she was mostly unresponsive.

After all the trauma they had suffered, the Cervenkaschs were desperate for a cure. KWB agents looking to plunder Thavnair’s streets for disposable research subjects recruited them.

In time, the charismatic Caius gained their trust with his false empathy. He told them that as long as they agreed to submit their child for KWB’s future projects, Arylett would be cured.

In his attempts to recreate Aulus’ Resonants, he exposed her to vast quantities of aether and all manner of experiments, none of them producing much results beyond an aether sickness so potent that she had started hallucinating. One powerful hallucination she had received was that of a starshower and meteors hurtling towards her.
Inadvertently, this experience had awakened the Echo within, an experience that gasped her awake into life. The Echo ability she had been granted allowed her to perceive that around her in slow motion, relieving her mind of its constant overstimulated state due to being given the time she needed to process information. As she grew older, she became fully able to function.

Believing that his technique must have bore successful fruit, Caius continued for years to replicate the success, but could not. Arylett grew up in a life of subservience to KWB. Her parents would would not put a stop to the experiments, feeling so grateful to Caius that they kissed the earth he walked upon. They insisted that she also be gracious towards the man who had cured her. For quite some time, she simply kept her head down, and accepted the truth that KWB was always right, and she was always wrong. Even as her parents perished under their care.

By her late teens, KWB had been discovered by the authorities and all of its operations shut down, with Caius being made to pay for his crimes. An old Roegadyn Sage who had assisted in hunting down the group [named Wysseidin Sykursyn, Eidin for short] took her in. And it was then that she knew true freedom.

From then on, he raised her like a kindly yet sometimes excessively stern grandfather, nourishing her curiosity and encouraging individual thoughts and ideals. He encouraged her to create her own identity and path, symbolizing this by changing her name to one of her own choosing. Her name was inspired by the diverse peoples of Sharlayan, with multiple traits coming together to make something truly her own.

From then on, the newly christened Arylett Charnoa firmly became entrenched in the ways of Sharlayan and sought to become a Sage just like him.

Many years of hard study ensued, as did some fierce debates with other students. Yet she would never argue with Eiden, even as her views began to diverge more.  Arylett had interpreted philosophical concepts in ways differing from her peers, always processing things through her own lens. Even up to the end of Eiden’s life, she held in the resentment of him always seeming perfect, always being the one she could never dispute. A reality of her own making, her mind still very much scarred from her earlier experiences.

After finally becoming a Sage, she found herself struck by a sense of emptiness and insignificance. Most of the jobs she could find in Sharlayan were menial in nature, and attempts to emulate Eiden’s task of hunting down KWB led to the Forum obstructing her at every turn and insisting they were handling it. Nothing felt like she truly would make a difference as Eiden had for her. Thus, with some trepidation, she decided to seek opportunities outside of the only home she had ever known.